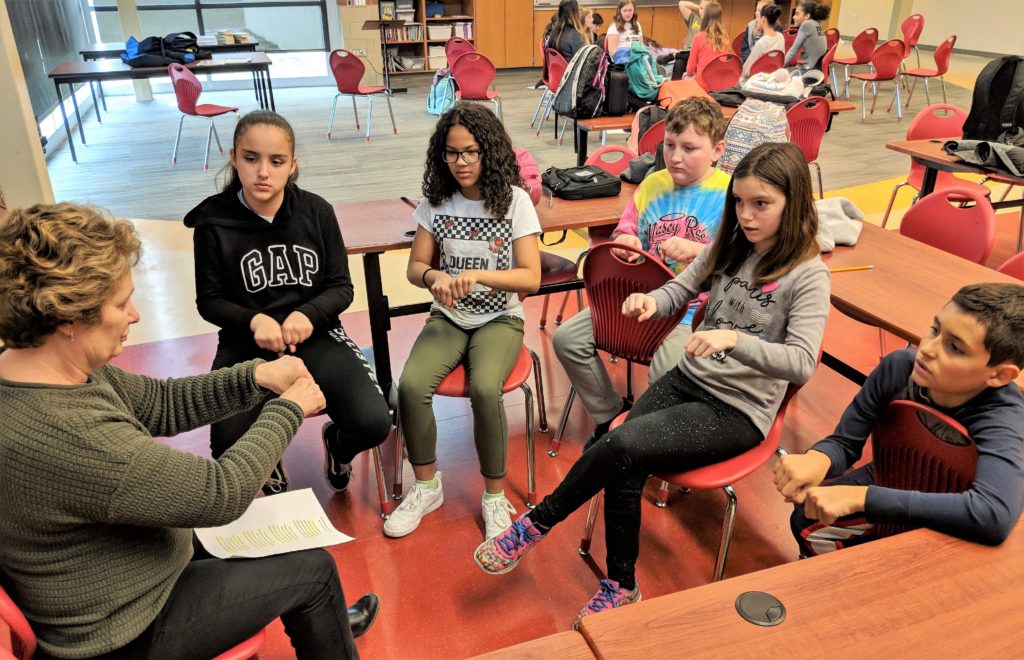 About 30 Hambright students meet after school every Wednesday to learn a new language, with the goal of breaking down communication barriers with people who are different than themselves.

But the members of this club aren’t learning a traditional foreign language. They’re studying American Sign Language and Signed English under the direction of teacher Lorien Gilbert.

Gilbert started the club to give students an opportunity to connect with hearing-impaired individuals who often feel ostracized. She is assisted by the school’s librarian, Tara Etzweiler, and Nasy Sok an aide at Hambright whose two daughters, Jessica and Soksopia, are in the club.

She also got a boost from Penn Manor Education Foundation, which awarded her a $300 Venture Grant to purchase materials for the club.

Members include fifth- and sixth-graders, along with a third-grader whose father is hearing impaired. Students use flash cards and sign language textbooks to learn vocabulary, verbs, grammar and expression.

The students learned to sign the song “We’re Going to Be Friends,” which they performed during a recent school assembly. They also watched a presentation about a deaf poet, and they plan to Skype with their peers in a deaf education class run by Intermediate Unit 13.

“We thought it would be fun for my hearing students to meet some deaf kids who can be the experts,” said Gilbert.

Madalyn Kreider, a sixth-grade member of the club, said she likes “being part of a little group in school” that’s learning something completely new.

“It’s really cool to find out about this. Now, if you run into someone who’s deaf, you can talk to them,” she said.

The club is an outgrowth of Gilbert’s personal experience with Deaf culture. As a child, she experienced hearing loss and began to learn sign language on her own.

“When I was in high school, I made a very good friend, Scott, who is deaf, and he introduced me to Deaf culture and really helped me to become more fluent in Signed English and ASL,” she said.

Whenever Gilbert would go out with Scott, she noticed that people would talk to her, but not to him.

“Scott’s mother told me that other kids were reluctant to talk to Scott, and that he had very few hearing friends,” she recalled. “It’s a world of isolation when people perceive you as different.”

The ultimate goal of the club, Gilbert said, is for students to connect with people like Scott.

“If I can help my students feel brave enough to sign ‘Hello’ or, ‘Do you want a snack?’ or even, ‘What is your name?’ then they will be making the world a little less scary.”